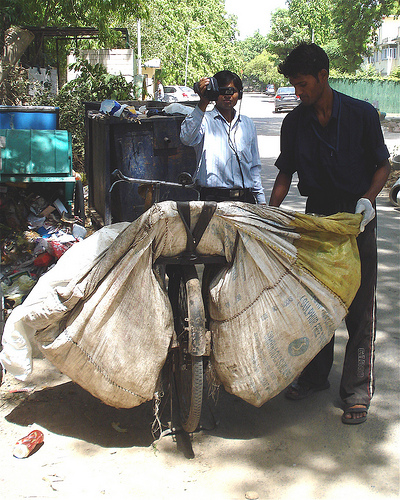 The Advocacy Project via CC

First published on Caleidoscope. The issue of waste management in India is a much debated topic which needs no introduction. Everyday, large space is dedicated in the media to highlight the problems of urban waste. Politicians often use it as a talking point, while commoners make it a point to crib about it. Meanwhile, as tons of solid waste continues to pile up in the outskirts of cities, nothing seems to happen on finding a permanent solution to this everyday problem. It is hard to believe that a developing country like India which suffers from severe resource crunch in almost all natural resources, can afford to create such enormous piles of waste.

Thankfully, some models of sensible waste management and resource creation through recycling are emerging across a few cities of India. This is a collection of four case studies of waste management in Indian metro cities – Bangalore, Hyderabad, Pune and Surat.

India’s IT hub Bangalore’s (Bengaluru) population doubled from 4.1 million in 1991 to 8.4 million in 2011. Various initiatives for waste management through door-to-door collection, waste segregation and recycling were attempted, including the ‘Swaccha Bengaluru’ initiatives launched under the Bangalore Agenda Task Force project in 1999. However, like all government top down-oriented initiatives, this too bit the dust in 2004.

Around this time, a small NGO named Saahas began to make independent efforts build awareness and create infrastructure for waste recycling. When people had no consciousness about waste pile up, educating them about reducing waste and recycling it was truly a daunting task. Since I was a volunteer for Saahas during 2008-09, I very well remember the disdain citizens had for waste segregation and plastic carry-bag elimination activities.

Under the leadership of Wilma Rodrigues, Saahas has been able to convince a few large corporate enterprises to begin electronic waste (e-waste) collection and recycling activities. Soon e-waste kiosks came up across the prominent shopping locations in the city where people could drop batteries, CDs, chargers and other worn out electronic gadgets. This was India’s first e-waste initiative created along with other partners such as WeP Peripherals and E-Parisaraa.

Apart from e-waste, Saahas took up the challenging task of organic waste composting and dry waste recycling in corporate offices. Large companies generate enormous volumes of organic waste such as discarded food, tea and coffee grounds. When this waste is mixed with dry waste material such paper, cardboard boxes, tea cups and plastic, these useful items could not be recovered.

Saahas convinced a few large companies such as State Bank of India, Texas Instruments India, and Microsoft India to create a proper system for waste collection and segregation which not only eliminated the task of waste disposal, but also generated revenue from recycling. Similarly another interesting activity by Saahas is to collect waste tetra packs from various schools in Bangalore and send them to Damanganga Paper Mills who convert them into furniture!

Truly a WoW initiative in Hyderabad

Hyderabad is another large south Indian city which grew big during the IT boom that followed the liberalisation of the Indian economy. Just like Bangalore, the city was fortunate to get a state government that was eager to develop the city’s urban infrastructure. In 2007, 12 different municipalities were merged to form the Greater Hyderabad Municipal Corporation (GHMC). Despite this merger and government intention, waste management in Hyderabad remained a messy activity.

Fortunately, private companies and concerned individuals stepped in to manage the humongous waste generated in Hyderabad city. ITC, the leading FMCG company, joined hands with a few NGOs and resident welfare associations (RWAs) to create the Wealth out of Waste (WoW) Initiative in April 2007.

RWAs appoint volunteers for each locality or housing complex to encourage households to segregate their dry waste. Volunteers distribute storing bags specially prepared for dry waste and collect them back. White colour bags for waste paper, while blue colour bag is meant for plastic and metal items. ITC pays Rs. 2-5 per kg for plastic and metal items, and pays Rs. 4-5 per kg for paper material. The collection is done every week or once in 10 days based on the collection of each locality. The collected material is then transported to the junkyard where it is segregated and sent for recycling. Paper waste is baled and sent to ITC’s reprocessing plants in Bhadrachalam. Apart from this, wet waste is collected daily by the GHMC.

The monetary benefit acts as an incentive for residents to participate actively in the WoW initiative. Today, the WoW initiative covers about 27,000 households in 250 locations in Hyderabad. Apart from Hyderabad, resident welfare associations in 15 municipalities located in Andhra Pradesh have joined in. ITC has a business motive to launch this initiative since its Paperboards & Specialty Papers Division in Bhadrachalam needed steady supply of recyclable paper and polymer material. 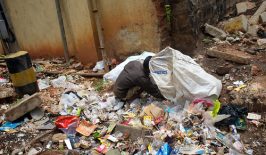 A team of anonymous do-gooders are transforming the rubbish-laden areas of Bangalore in an effort to change attitudes about waste disposal and promote a sense of civic duty in all citizens.