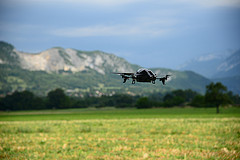 The report, released on Monday, 23 February by the Expert Panel on Technology and Innovation (led by peace and security expert Jane Holl Lute), calls for a general upgrade in technological tools used in peacekeeping missions with a particular emphasis on scaling up the use of unmanned aerial vehicles (UAVs) to monitor conflict zones.

The proposed technology would gather satellite images and data that could be used to assist the UN Security Council in decision making as well as help peacekeepers best understand any environment they are entering so as to plan courses of action that minimise the risk of harm to civilians and those taking part in peacekeeping missions.

In 2013, the UN started using unmanned drones in the Democratic Republic of Congo to track the movements of armed rebel forces in the country’s east. The UAVs have helped peacekeepers keep on top of what’s happening in the region with the UN citing an incident last year whereby a UAV detected a ferry accident in Lake Kivu, resulting in boats and helicopters being immediately dispatched and 15 people being rescued.

Monitoring conflict zones from above is nothing new but could significantly help the UN deliver more targeted and immediate responses to crises. The Satellite Sentinel Project, founded by actor George Clooney and activist John Prendergast, uses satellite imagery as an early warning system to deter mass atrocities by focusing world attention on areas where tensions might be hostile. Similar to the UN’s plans, the images provide the basis for developing rapid responses on human rights and human security concerns.

To read the UN report in full, download the PDF here.