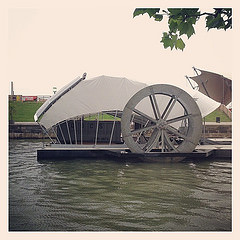 A solar-powered wheel is scooping out trash and plastic from Baltimore’s inner harbour.

Getting trash, and particularly plastic waste, out of our oceans is a vital yet tricky business. About 40,000 tonnes of plastic is currently in circulation in the water and scientists estimate that up to 99 percent of oceanic plastic is ‘missing’ and presumed eaten by marine animals. In early 2015, a group of scientists published a report that indicated that between 4.8 and 12.7 million metric tonnes of plastic trash generated on land in 2010 ended up in the world’s oceans. While there are a number of initiatives underway that look to remove plastic that is already in the ocean, one initiative in Baltimore, Maryland in the US is looking to grab the trash from waterways before it floats out to sea.

Developed as part of Baltimore’s Healthy Harbour initiative (which aims to make the city’s harbour swimmable and fishable by 2020), the Inner Harbour Water Wheel (aka Mr. Tash Wheel) is like a solar-powered mill that sucks up garbage from the water. The river current spins the giant wheel which in turn helps drag rubbish out of the water and onto a conveyor belt before placing it in a dumpster barge. When the current is not strong enough, the contraption relies on power derived from solar panels to keep it running. As the barge becomes full, a new dumpster is put in place and the collected trash is incinerated and used to generate electricity.

The position of the wheel in the harbour means it can catch trash, debris and plastic that would otherwise flow on towards the Atlantic Ocean and it has removed 331 tonnes of rubbish from Baltimore’s inner harbour since its launch in May 2014.

The wheel even has a Twitter account so you can keep up-to-date on its daily diet of cigarettes, plastic bottles and other delicacies or find out more about the initiative on Baltimore’s Waterfront Partnership website. 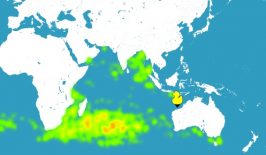 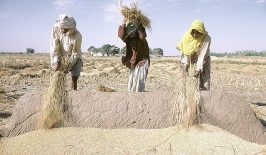