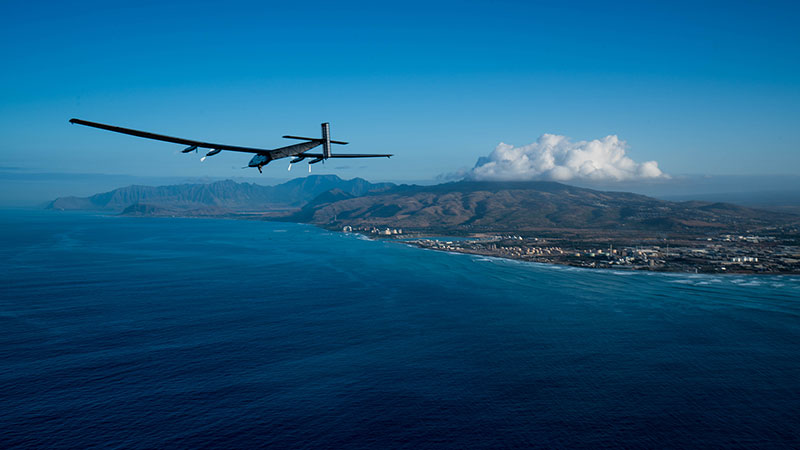 To highlight our need to move away from fossil fuels, pilots Bertrand Piccard and André Borschberg last year set off on a round-the-world trip in a plane powered completely by solar energy, Solar Impulse 2. Their 35,000km journey has been smashing world records as well as perceptions about the possibilities of clean, renewable technologies.

To highlight our need to move away from fossil fuels, pilots Bertrand Piccard and André Borschberg last year set off on a round-the-world trip in a plane powered completely by solar energy, Solar Impulse 2. Their 35,000km journey has been smashing world records as well as perceptions about the possibilities of clean, renewable technologies. We chat with the team from Solar Impulse 2 to get a deeper insight into the goals behind this initiative.

Solar Impulse 2, the solar-powered airplane that began its journey across the world in early 2015, recently set off from Hawaii, kicking off a series of legs that will see the plane and its pilots head towards Abu Dhabi, the point of departure and final stop on this epic adventure. The plane, which had been grounded since July last year after a non-stop, five day flight from Japan overheated some of the aircraft’s batteries, runs entirely on renewable energy and can reach speeds of up to 100mph. Its wings – which span the same length as the wingspan of a Boeing 747 – are covered in 17,248 solar panels that generate power for the plane’s four propellers. The plane’s batteries also store electricity for use during night flights.

The unexpected pause in Hawaii has not been a setback for the team, who used the time to tinker with their model, fix any issues and prepare themselves for the second half of the trip. Having replaced the plane’s battery pack and installed a new battery cooling system, the team has once again taken to the skies to demonstrate the potential of green technologies. We spoke with the team from Solar Impulse about the journey thus far and the opportunities that clean tech offers.

What drove the team to develop, build and launch a solar-powered airplane?

Solar Impulse started off with the vision of building an airplane capable of flying night and day without using any fuel, propelled solely by solar energy. The aim of the project was to develop a symbol which would attractively promote a pioneering and innovative spirit, particularly in the field of renewable energy and clean technologies.

What are the biggest successes you’ve had to date?

The Solar Impulse project’s success will of course be measured by the accomplishment of the Round-The-World Flight, but not only. Our goal is to demonstrate [that] clean technologies, such as the ones used on the Solar Impulse airplane, have the potential to change lives, societies and future markets in an unprecedented way. Solutions exist to power the world on clean technologies. Our hope is to motivate everyone to reduce their dependence on fossil fuels in their daily lives and encourage concrete actions for sustainability.

In terms of the technical aspect of flying a solar-powered plane, what have been the biggest challenges thus far?

Making an airplane fly five days and five nights non-stop remains the most challenging part of the adventure at all levels: technology, human and routing (referring to [the] weather forecast that needs to be evaluated five days in advance). The landing in Hawaii marked a historic first for aviation as well as for renewable energies. We have demonstrated that an airplane can fly longer without fuel than a conventional airplane – that’s fantastic.

Solar Impulse is approaching perpetual flight and therefore, theoretically, could fly forever. One of the main challenges is the human factor i.e. pilot’s sustainability. No sleep is permitted while the plane is flying over populated areas, but over the oceans and unpopulated areas, sleep is planned and integrated in the form of short naps of up to 20 minutes at a rate of one to 12 times a day. The pilots have also developed techniques to relax the body while remaining awake – Bertrand Piccard uses techniques of self-hypnosis and André Borschberg [uses] yoga techniques.

You’ve had some setbacks on the journey. What have been the biggest lessons regarding clean technologies and travel throughout the trip?

The Round-The-World Flight is not a race against time. The end of the match is approaching – we won the first half and now we have to win the second. This means after the landing in Phoenix, complete the crossing of the USA and the Atlantic, before finally getting back to Abu Dhabi. Furthermore, if the impossible were easy everyone would have done it already and it can therefore take many attempts. This was true of the first round-the-world non-stop balloon flight performed by Bertrand Piccard: the first two attempts failed and he had to try a third time to succeed. Our philosophy remains the same for Solar Impulse but we are confident we will be able to accomplish the rest of the journey this year.

You’ve also been working on an unmanned solar-powered aircraft. What are the plans for this?

Multiple developments in the areas of ultralight materials and energy savings, in the efficiency of components, in the greater reliability and performance of electric motors, in the efficiency of solar cells, in energy storage and the energy density of batteries, can already be taken into account. In addition to this, with our expertise, we could be at the forefront of the development solar drones, or so-called high-altitude pseudo-satellites (HAPS), which would be capable of flying at high latitudes for months at a time supplementing the work of satellites! A part of the Solar Impulse team has already begun a conceptual study on solar-powered drones with the aim of developing an unmanned aircraft with similar technology to Solar Impulse that could be used for communications, measurements and observations. It will be able to fly in the stratosphere (+approx. 20 KM), be either geostationary for long durations or able to move to different locations.

Greenhouse gas emissions from the aviation industry are expected to rise substantially by 2020. In your view, do clean technologies have a future in aviation and, more broadly, travel? Do you think there is a market for commercial solar-powered planes?

Even though we are capable of flying around the world in a solar powered airplane with perpetual endurance, it is not our goal to revolutionise the travel industry as such, but rather to demonstrate that clean technologies, such as the ones used on the Solar Impulse airplane, have the potential to change lives, societies and future markets in an unprecedented way.

Bertrand Piccard: “In 1903, when the Wright brothers succeeded in flying their airplane over a distance of 200m, who would have imagined that 24 years later Lindbergh would cross the Atlantic Ocean? He was alone on board and 30 years later airliners would carry 200 passengers, completing the same journey in eight hours while two men walked on the moon!“

What are the future plans after Solar Impulse 2 completes its journey around the world?

The short term plan is to complete the second part of the Round-The-World Flight successfully, but the adventure will not end [when] Solar Impulse lands back in Abu Dhabi. Solar Impulse started off with the vision of building an airplane capable of flying night and day without using any fuel, propelled solely by solar energy. The aim of the project was to develop a symbol which would attractively promote a pioneering and innovative spirit, particularly in the field of renewable energy and clean technologies. Everyone that has followed Solar Impulse around the world, including our supporters and partners, can continue to promote this message and spread the word by joining the Future is Clean movement and demanding concrete actions for a clean future.

Bertrand Piccard: “André and I launched the « Future Is Clean » movement when starting the Round-The-World Flight in Abu Dhabi. Our goal is clear: we want to use Solar Impulse’s worldwide visibility in order to champion the messages we have been communicating since 2003: clean technologies not only protect the environment, but also [contribute to] job creation and sustainable growth.”

TIMES Pieces is an ongoing editorial series on RESET.org where we speak with people who are employing TIMES principles (Telecommunications, IT, Mobile, E-Commerce, Service Provider) for social and environmental good. Read more in the series: TIMES Pieces 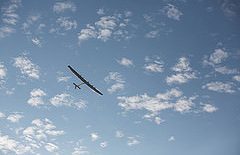 Around the World in 12 Solar-powered Legs

An adventure with an ecological mission: Bertrand Piccard and André Borschberg are on a journey around the world with the solar airplane 'Solar Impulse 2'. The two wish to demonstrate how clean, green technologies can play a big role in changing the world. Follow their trip!