TIMES Pieces: LOCK8, the Easy Way to Share a Bike

In order to use a rented or shared bike, you have to register anew in every city and get acquainted with the system. It doesn’t have to be that way. LOCK8 has a vision, enabling every person to rent a bike easily anywhere in the world using one single app. We spoke to Philipp Mallmann, in charge of business development at LOCK8, about the potential of these digital locks.

What makes Lock8 better than other locks?

Phillip Mallmann: LOCK8 is controlled using a smartphone app. That means no keys are needed. A lock can be located at any time using the integrated SIM and GPS-chip, for example by customers looking for a bike, or if a bike was stolen. LOCK8 also has various sensors which will trigger an alarm when an attempt is made to steal the bike. In such instances, an acoustic alarm will also be sounded.

What powers the lock?

In the first generations, the lock will be charged using a hub dynamo. Bike-sharing companies and bike rentals must therefore equip their bikes with this kind of dynamo in order to use the system. We’re also working on a more consumer-friendly version of LOCK8, which could be charged using – for example – solar energy. However, this new version will not hit the market before 2016.

How secure is the lock against hacker attacks?

It is quite secure, as we use only algorithms used by various other tools and applications that have the utmost need for security. However, there’s always a way to hack something. We have the advantage that we are not completely reliant upon Bluetooth, and we use a GSM channel which adds a level of security.

What inspired you to create the lock?

Whiel we were students, our bikes were stolen several times. We had the idea for the lock over a cup of coffee – originally we wanted to develop a high security bike which communicates with its owner. That idea then gradually transformed into the lock as a bike sharing system.

Who do are you targeting with your new lock?

Everyone who wants to start a bike-sharing system or a bike rental. Universities, already existing bike rentals, cities and communities, companies and bike shops have already shown an interest in the system because they want to upgrade their current systems to a smarter and simpler one, or because they want to enter the sharing / renting market.

What’s behind your sharing approach?

We want to build up a worldwide bike-sharing platform using the lock. Every person should have the opportunity to very simply – using the app – rent a bike with a mere press of a button. There are already a lot of bike sharing initiatives in many cities – it is very trendy. However, the current systems are very expensive, complicated, and you need to re-register when you want to use the system in a new city. LOCK8 is set to revolutionise the current system – it willll always be the same: open the LOCK8 app, book the closest bike, cycle. Because of this the focus is currently on commercial rentals.

What about the materials you use? Are they sustainable and ethical?

The sustainable part of LOCK8 is that we enable every person to have very easy access to a bike. We are convinced that our system will make bike sharing more popular, making people less reliant on their cars.

Where can I buy the lock?

From spring 2015, LOCK8 will be available to commercial bike-sharing companies from one of our distributors. 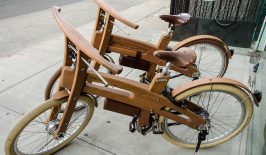 Electric Wooden Bikes Are a Go-Go

Ever wondered what it would feel like to ride an electric wooden bike? No? Maybe it's time to start, because thanks to a Dutch bicycle company, they're shock absorbent, sustainable and will take you on one smooth ride.