Thumbs Up! Watch the Med Is Our Favourite Project of the Month

There are tonnes of good ideas that can change the world. Regular readers of RESET will already know of a few. Every month, we will choose one idea that stands out thanks to its impact and innovative approach. Our favourite project in April: Watch the Med.

There are tonnes of good ideas that can change the world. Regular readers of RESET will already know of a few. Every month, we will choose one idea that stands out thanks to its impact and innovative approach. Our favourite project in April: Watch the Med.

Earlier this month, we spoke with the team behind Watch the Med which operates a hotline that refugees and asylum seekers can call when in danger at sea. Even in instances where the actual measured distance travelled by refugees and asylum seekers over the seas is not very big, the journey is nevertheless a long one. This is due to the use of outdated and overcrowded boats, which often find themselves in distress and the target of illegal “push back” actions in which the coast guard attempts to send back boats that are nearing the European coast.

Activists from multiple European countries as well as Morocco and Tunisia have joined the ‘Watch the Med‘ network to offer their help. Via the dedicated hotline, migrants that face dangerous situations at sea can call in and alert the team. The alarm phone was launched in October 2014 and has, since then, been used often. The team behind the system have been able to rescue lives 12 times and been able to safely direct hundreds of people to a European coast.

The need for services which assist refugee and asylum seekers reaching Europe by water was highlighted recently when a boat capsized off the coast of Libya in the Mediterranean sea and a reported 800 people lost their lives.

Here’s how the team works when a call comes through to the alarm phone:

We try to find out where exactly the boat is located in order to call the coast guard in charge of that area. We also try to keep in touch with the people in distress and the coast guard to find out whether the rescue operation has been carried out. When that has not happened, there are a number of ways to build public pressure. One of our main concerns is to observe and document the rescue operations in detail and to publicise instances where inadequate measures were taken (or none taken at all), as well as to gather evidence in cases where illegal push backs have occurred. We also look to support people during the rescue operation. 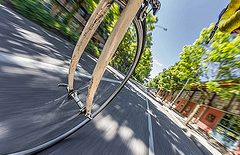