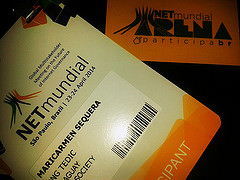 Last month, representatives from the world’s leading tech companies joined international government officials in Sao Paulo for NETMundial, a meeting that aimed to map out a blueprint on managing the internet on both a global and national scale.

Hosted by 1net and the Brazilian Internet Steering Committee, the event tackled subjects like human rights and the invasion of privacy, creating and maintaining accessible and open web platforms and security while looking to establish a set of overriding principles that would influence and inform a fair, just internet governance ecosystem.

The timing of the conference is key. It’d be easy to blame the fallout from the NSA spying scandal for the general sense of mistrust consumers have for the internet, particularly given the recent surge in encryption yet our wariness of the online world is certainly nothing new. A 2012 US study found that the majority of respondents distrust the internet, particularly in areas such as the veracity of information published online and fear of fraud.

A broad spectrum of internet policies were represented at NETMundial, with opposing models of internet governance coming to the fore. Russia passed a law during the conference that, according to Business Week, ”prohibits Internet companies from doing business there unless they agree to keep data obtained in-country on local servers for at least six months”. Business Week also noted that Brazil passed a law the very same day that makes freedom of expression online madatory, bars internet service providers from discriminating against certain websites for financial or political reasons, and doesn’t require local data centers. One of the biggest outcomes of the conference was a document emphasises a bottom-up, open and participatory approach to international internet governance however, the fact that the document doesn’t outright condemn mass surveillance via the web has drawn some ire.

With a sensitive topic like internet governance, authorities must tread carefully and conferences such as these will not please everyone, as evidenced by the Russian delegation stating that the event should have been more transparent and collaborative. Regardless, these types of discussions are vital and NETMundial’s ability to draw a top crop of tech and governmental officials demonstrates the many hands at play in all forms of internet governance.

Read more about NETMundial at the website or read the outcome document here (PDF).