Solar Power on the Water 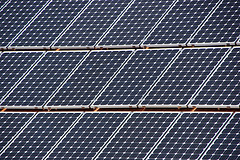 Looking to balance a commitment to more renewable energy with the fact that available land in the country is scarce, Japan is maximising space and building floating solar farms on water.

Looking to balance a commitment to more renewable energy with the fact that available land in the country is scarce, Japan is maximising space and building floating solar farms on water.

Finding space to plot solar farms in populous areas is no mean feat. In the Netherlands, solar panels line bike paths while in South Korea, solar panels run right down the middle of a busy highway. Japan is the latest to rethink the standard solar farm setting with Kyocera recently launching a configuration that features solar panels floating on top of a reservoir. The floating solar farm – located in the Hyogo prefecture – will reportedly produce around 2,680 megawatt hours per year — enough for 820 typical households. Kyocera plans to build a lot more of these floating farms over the coming years to help facilitate a move toward more sustainable forms of energy.

The move is part of the country’s plan to double the amount of power it obtains from renewable sources by 2030, a goal that was set in the aftermath of the disaster at the Fukushima Daiici Nuclear Power Plant in 2011.

Apart from cutting down on land use, setting up panels on top of bodies of water reaps a few other rewards such as keeping the panels cool and inhibiting water evaporation and algae growth which in turn helps the marine ecosystem in the water to thrive.