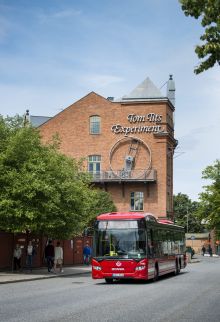 Scania will release one bus onto city roads as part of a broader project that looks at sustainable transportation. A charging station will be set up at one stop on the bus’ route, allowing the vehicle driver to wirelessly recharge (via the road’s surface) in about seven minutes. The power derived from this pit stop should (based on calculations) charge the bus long enough to complete one route.

The pilot programme is a huge step towards developing concrete, sustainable alternatives to common modes of transportation that are still heavily reliant upon fossil fuels for power. Not only could such a move help a city bring down its CO2 transport emissions, it could also help slash fuel bills, something Håkan Sundelin, research and development coordinator for hybrid technology at Scania, has supported by stating that “with a fleet of 2,000 buses, [Södertälje] can save up to 50 million litres of fuel each year. This means the fuel costs decrease by up to 90 percent.”