Nualgi – a Saviour for Sewage Water? 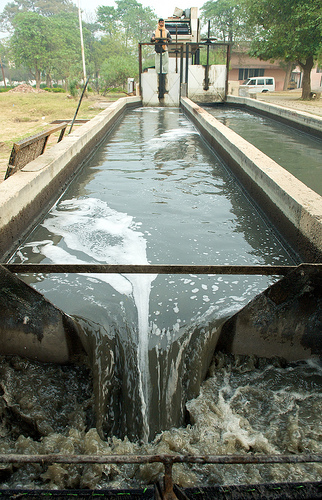 First published on Caleidoscope. The issue of waste management in India is a much debated topic which needs no introduction. Large space is dedicated in the media every day to highlight the problems of urban waste. Particularly, pollution of water bodies due to sewage dumping has rendered all the rivers and lakes in urban areas unusable.

The problem is obvious to everyone who has lived in a city in India. While the debate on cleaning our rivers and lakes goes on, there are a very few people coming up with solutions. However, most of these solutions are either exorbitant or too tedious to implement. Thankfully, some interesting ideas have emerged that are not only cost effective, but also provide sustainable solutions.

Nualgi Nano Silica is one such technology developed by Indian innovators to feed diatoms. Diatoms are a type of single cell algae (phytoplankton), which live in all types of natural water bodies. Diatoms use sunlight to produce food through photosynthesis and they become food for other zooplanktons, which in turn are food for fish. When this cycle is completed, the oxygen level in the water rises and the water body becomes healthy for all living beings.

Realising their value, T Sampath Kumar experimented with diatoms when he started a shrimp hatchery in Mahabalipuram way back in 1994. He grew diatoms in the hatchery in the conventional way using Sodium Silicate and f/2 media. Later, he decided to experiment with Nano Silica as an alternative to Sodium Silicate and then developed a solution to load all the micro nutrients on to Nano Silica.

There have been other technologies innovated in the West to treat sewage water such as BioWish, which introduce a type of bacteria into water. Speaking about the main difference, Bhaskar M V, from Kadambari Consultants said, “Unlike BioWish, Nualgi is like a regular farm fertilizer that causes the native diatom algae present in water to grow. Nualgi Nano Silica is in a powder form which is dissolved in fresh water before mixing with contaminated water. The oxygen from Diatoms causes the native bacteria to grow.”

The first application of Nualgi on sewage water happened in 2006, when it was used for treating Madivala Lake, a large lake in Bangalore. Being in the heart of a major residential area, Madivala Lake receives domestic sewage, which significantly reduced the oxygen content thereby affecting the aquatic life. In 2006, Madivala Lake encountered a drastic situation, which led to mass fish death.

To solve this problem, local fishermen added Nualgi powder in the lake to solve the problem of fish death in the sewage laden lakes. The powder was used once in 15-20 days or whenever they experienced lower fish harvest. Typically, 1 litre of Nualgi mix is needed for 2 million litres of sewage or 1 litre for 1 hectare sized water body. Apart from preventing algal growth, Nualgi inhibits growth of water hyacinth as well.

Beyond large water bodies, Bhaskar M V feels Nualgi can also be used for treating sewage water from a residential apartment complex as well. Typically, sewage from a complex of 50 houses would be about 25,000 litres per day (100 litres per person). If there is space for open water storage, the sewage can directed to a katcha pond with plastic sheet lining, and without any special construction. The pond/tank can be covered with transparent acrylic sheets for aesthetics and safety. The treated water can be used for gardening, car washing, toilet flushing and other purposes.

Author: Priyadharshini for Caleidoscope. A colourful composite of creative ideas, forward-thinking and reflections from the community, Caleidoscope offers a more personalised look at contemporary culture, everyday environmentalism and civic engagement. 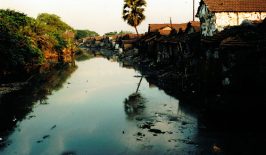 Following the Flow: Where Wastewater goes

The rapid rate of population growth and urbanisation that has been taking place domestically has made it difficult for India's infrastructural developments and regulations to keep pace.