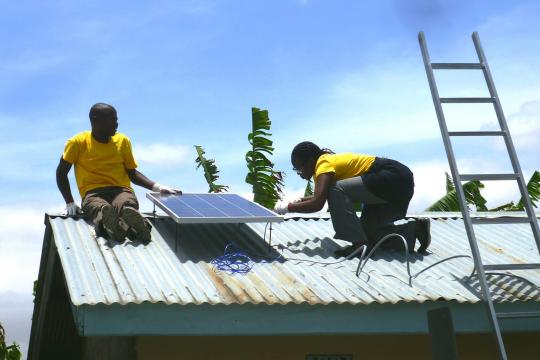 An estimated 2.5 billion people worldwide have no proper access to a reliable energy source. Many households rely on kerosene lamps and diesel generators in order to light their homes, charge their mobile phones or watch TV. This reliance on fossil fuels isn’t just expensive, it also has environmental and health repercussions.

Berlin-based organisation Mobisol aims to provide a means for low-income households to power themselves with high-quality solar energy by setting up a model whereby solar electrical output is paid for via an innovative microfinance payment method that works on mobile phones.

The Mobisol Solar Home System consists of small panels that are installed on rooftops and generate enough electricity to light multiple rooms, charge mobile phones and power electrical appliances. Using the SMS function on mobile phones, customers can pay off the cost of the panels in small, affordable rates over a period of 36 months. Mobisol began its commercial entry into the market in December 2012 following a succesful pilot phase carried out with 300 paying customers in Kenya and Tanzania. In 2013, the team plans to install 3,000 systems in Tanzania, Kenya and Ghana.

Protection for and from Lions with Prepaid Solar Energy

During our first donation phase, we are looking to equip one Maasai family with Mobisol Lion Lights. The pilot project Mobisol Lion Lights provides solar-based automated lighting systems that deter predators such as lions, leopards, cheetahs and hyenas from grabbing cattle from Maasai “Bomas” (residences) during the night.

Mobisol has developed the predator-control package in collaboration with environmental protection projects in the region. The offering is comprised of high-quality LEDs that blink throughout the night with varying frequencies to keep lions away, preventing acts of revenge being carried out on the animals and promoting a peaceful coexistence between the Maasai, lions and conservationists. Outside of this, the solar-based system generates enough power to light the family’s hut and recharge mobile phones. Children who spend their days watching the cattle are no longer dependent upon health-damaging kerosene lamps in order to complete their homework at night while making long journeys to environmentally-straining generators to recharge phones can become a thing of the past.

All the info on the project can be found here: Mobisol – Solar Energy via SMS