Three of India’s endangered species have been targeted by the Save Our Species (SOS) campaign, a global coalition initiated by the International Union for Conservation of Nature (IUCN), the Global Environment Facility and the World Bank. The targeted species are: the white-bellied heron, the Gangetic dolphin and the river terrapin.

Three of India’s endangered species have been targeted by the Save Our Species (SOS) campaign, a global coalition initiated by the International Union for Conservation of Nature (IUCN), the Global Environment Facility and the World Bank. The targeted species are: the white-bellied heron, the Gangetic dolphin and the river terrapin. In order to carry out this important conservation work, $250 000 has been set aside for the duration of two years in order to step-up on the fight to save these species.

So what are the facts on the three species?

According to an article in The Hindu, estimates suggest that the white-bellied heron is critically endangered with between 50-350 adults left in the wild. Most birds are found in reserve forests within the Manas Tiger Reserve in Assam on the Bhutan border. According to the Hindu, “the conservation effort will involve the protection of sites of occurrence and habitats critical to the species’ survival, establishment of a community-based participatory monitoring, trans-boundary coordination and learning with Bhutan, and awareness and sensitisation programmes for local stakeholders are part of the project.” In addition, local heron guardians will be appointed in order to patrol no go areas around heron nesting sites. The project will be carried out by the Ashoka Trust for Research in Ecology and the Environment. Access their website here.

According to the WWF, there are around 1,200 and 1,800 Gangetic dolphins left in the wild. The Ganges River dolphin inhabits the Ganges-Brahmaputra-Meghna and Karnaphuli-Sangu river systems of Nepal, India, and Bangladesh. The biggest threats to the dolphins are large damn and irrigation projects and other threats include the removal of river water, siltation arising from deforestation, pollution as well as entanglement in fisheries nets. The approach for saving the dolphins is a community based one. There are plans to establish conservation units and to regularly monitor the dolphins and their habitat. Training of fisherman on methods for the safe release of dolphins will also be undertaken and stricter protocols to prevent illegal fishing will be enforced.

The turtle conservation programme covers four different terrapin species in Bangladesh, Cambodia, India, and Myanmar and will be carried out by the Turtle Survival Alliance. According to The Hindu, the river terrapins selected for the support include the four-toed terrapin and the red-crowned roofed turtle found in the country. More information on the project being carried out by the Turtle Survival Alliance can be found here. 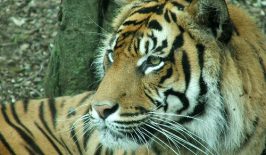 In the past few months, India’s attention has once more been focused on the plight of its critically endangered tiger populations.