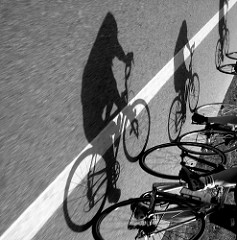 Watching this three minute video of a bike lane running 20 miles between the cities of Daejeon and Sejong in South Korea, it’s just amazing to see bicycles as micro-figures moving along the six-lane road down the centre of the highway – under the shade of a solar-panel canopy.

There has been some debate about integrating further solar panels into urban settings, particularly as shields or actual roads for bike paths. In 2014, the world’s first solar road project was implemented in a neighbourhood in Krommenie, near Amsterdam. Running 230 feet on a precast concrete bike lane, the project saw solar panels placed alongside a bike lane in the hope of generating power for local homes. The initiative is more a demo than practical approach as the angle of the solar panels means they don’t catch enough sun rays and will only generate 30 percent of what a conventional roof-mounted panel would produce. Given this fact, solar energy cycle stretch with public free accessible still has its promising future towards SMART road surface design:

A solar energy road will offer a unique chance to integrate different functions into the road surface. Sensors gathering information about traffic circulation can help improve traffic management, or even allow automatic vehicle guidance. Other possible functions are variable road markings, ‘tag-along’ LED-lights and heating in winter. And eventually, a system for wireless energy transfer to vehicles. – By Renewable Magazine.

If you are a green bike-lover, would you like to cycle on highway with cars zipping past you, even if you are sheltered by solar panels providing renewable energy? Projects like the solar panel tunnel in South Korea must also emphasise cyclist safety for maximum applicability. Maybe pragmatism should win over gimmick in this case.