Info Cycle: Where Are Our Bicycles Really Taking Us?

Smart Mobility is an attempt to understand what urban transportation might look like 10 years from now and to tackle those global issues that are likely to impact human urban mobility in the future: for example the rise in population growth, and public health concerns about pollution and air quality. Ford has conceived twenty-five innovative new projects which are to be carried out in cities throughout the world. One of those, Info Cycle, looks in detail at the behavioural patterns of bicycle users in Palo Alto, California.

Engineers at Ford have developed compact sensor kits that can be fitted on to bicycle wheels in order to gather detailed information about how they are being used within an urban context. The devices are able to track factors such as acceleration, altitude and wheel and pedal speed, and can offer valuable insight into how bicycles might be best positioned to meet future urban mobility needs.

It’s a phenomenon that’s difficult to measure on an international scale, but several studies suggest that bicycle use is steadily increasing throughout the world. That includes countries of car-lovers like the US, with the total number of trips made by bike in the USA increasing rapidly between 2001 and 2009. In the huge metropolis of London too, the number of people using the bicycle for the daily commute more than doubled between 2001 and 2011. And according to statistics from the Earth Policy Institute, world bicycle production in 2007 was more than twice that of car production, with bicycle output nearly quadrupling since 1970.

Bicycles offer us a flexible, healthy and clean, not to mention affordable, form of transportation, as well as offering cities an opportunity to reduce smog and traffic congestion. But with more and more people in cities around the world donning their helmets and climbing onto the pedals, the problems surrounding the issue of cars and bicycles sharing our cities’ streets is becoming ever more critical. With cars still ruling the roads in most countries and increasing numbers of bikes joining the traffic flow, what can we do to make that relationship a harmonious one, for everyone involved? By collecting data from multiple bikes around Palo Alto, Ford’s innovative project may well offer us the beginnings of a solution, the unique opportunity to better understand what an urban bicycle ecosystem looks like: uncovering the issues around how they share the roads with other users, and helping to bridge the gap between four wheels and two. 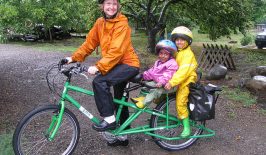 A Revolutionary Story of Cargo Bikes

We cannot put a price on clean, fresh air - it is be priceless. City mamas and dads are trying their best to preserve this precious thing for the next generations by adopting cargo bikes as a mode of transportation and replacing family cars.

TIMES Pieces: LOCK8, the Easy Way to Share a Bike

In order to use a rented or shared bike, you have to register anew in every city and get acquainted with the system. It doesn’t have to be that way. LOCK8 has a vision, enabling every person to rent a bike easily anywhere in the world using one single app. We spoke to Philipp Mallmann, in charge of business development at LOCK8, about the potential of these digital locks.