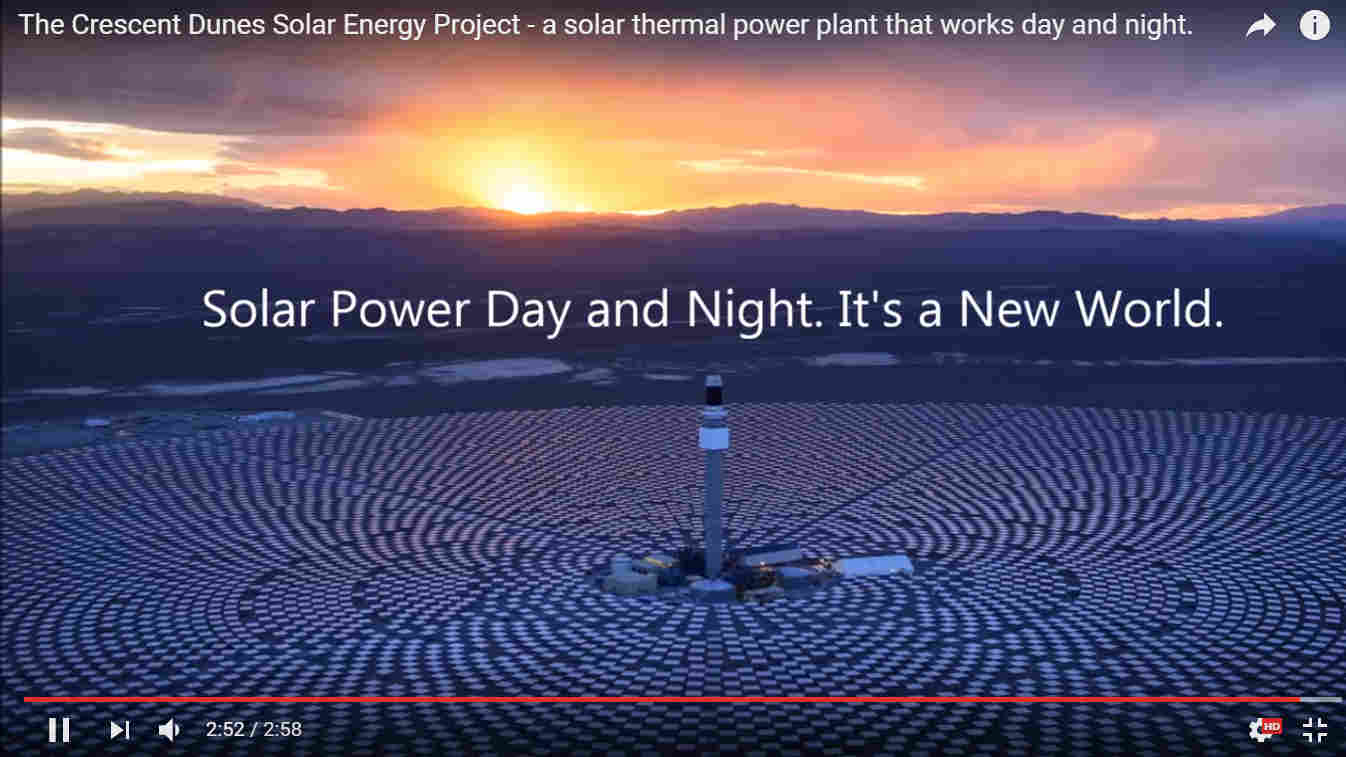 Crescent Dunes, a project by SolarReserve, is the only utility-scale facility of its kind in the world. Situated in the middle of the Nevada desert and covering a circular area with a diametre of one and a half miles, it uses Concentrated Solar Power (CSP) technology that allows solar beams to be captured by over ten thousand glass mirrors, called heliostats and made with some 1.2 million square miles of US-sourced glass, positioned around a central tower (the receiver).

Using GPS measurements and special software, the mirrors are designed to track the course of the sun throughout the day, capture its beams, and redirect them towards the receiver. This concentrates and stores this solar power, using what is known as ‘Molten Salt Thermal Energy Storage’. Molten salt – a mixture of environmentally friendly sodium and potassium nitrate – flowing through the tower absorbs the heat from the concentrated light, which can then be fully stored for up to 10 hours, enabling on-demand energy production for day and night for some 75,000 Nevada homes during peak demand.

According to SolarReserve’s website, at 500,000 MW-hours per year, the plant produces twice the amount of electricity of an equivalent-sized photovoltaics (PV) plant. The development not only has solved the issue of intermittent supply, and therefore unreliability, associated with PV technology, but its storage capabilities meant that no fossil fuels are needed as a back-up, therefore making its electricity generation completely emissions-free. And thanks to a dry-cooling system that uses water much more efficiently than conventional power projects, further environmental savings are also enabled.

On its website, Solar Reserves highlight that through the sourcing of materials from 25 US states, the project has contributed to the creation of some 4,300 jobs in the US. Clearly it has also prevented those carbon emissions that would otherwise have resulted from imports. Such considerations are sure to make any national government proud.

While some of the hazards associated with PV solar farms may still remain, namely the risks to biodiversity, or the need to clear large land areas, all in all the Crescent Dunes CSP project is a first that could become the model for a more reliable and sustainable solar power generation globally; indeed a similar project is already under construction in South Africa, while another one is in the pipeline for Chile.

In this video a few more facts about the project: