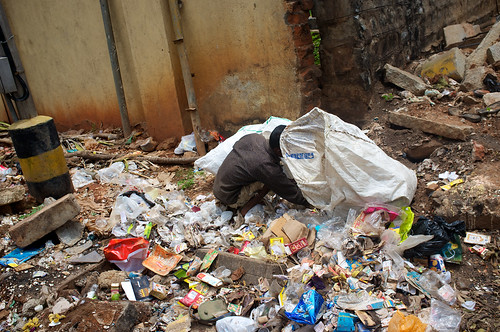 The program, run by the BBMP, requires segregation of waste at the source. It has seen cooperation in some areas but as yet, it has largely been a failure. The BBMP commissioner has highlighted two main reasons for this—people being cold to waste segregation and poor collection methods.

One can get a complete idea of the intensity of the problem by visiting the shopping hubs of KR Market or Malleswaram 8th Cross and the big heaps of garbage on the roadside that welcome people.

Posh areas like Jayanagar are no exception to garbage heaps. The city has not learned the importance of segregation. “Pourakarmikas don’t lift the garbage on time; this causes inconvenience to even pass by the unattended heaps which rot and spread a foul smell all around” said Harish Reddy from Jayanagar 4th Block.

To overcome the problem of these new heaps, the BBMP is planning to put garbage bins at the spots which are easy targets for people. The officials also discussed the same in review meetings pertaining to the garbage issue.

“It is not just the government mechanism that triggered the problem; but it is also the lack of co-operation and support from public.” said Sandeep Janardhan, a social activist.

There have been mixed opinions among the people regarding waste segregation. The innovators and early adaptors are enjoying the fruits of segregation in the form of clean surroundings. However, there are also laggards who remain insensitive and don’t bother to take up any initiatives.

Some people also find it complicated to segregate the way BBMP has asked them to. In most of the areas there is no segregation or efforts are very minimal. People who segregate also complain that they have taken pain to segregate waste, but when the Pourakarmikas collect them together they were turned off.

The failure of waste segregation has led to a disturbance in the waste management system of the city, though the root of the problem lies with protests by people in villages surrounding dumping spots. The High Court has also instructed the BBMP to attend to the issue and has cautioned it with severe action if it fails to do so.

In this instance I am reminded of a saying from Mahatma Gandhi, “when your needs are minimum and responsibilities are more, you gain strength”. If all the people in their individual capacities contribute to a cause through minimum usage as well as segregating the waste, the garbage will make way for a garden city once again. Via this process, the individuals need to feel the sense of responsibility towards nature and environment. It’s early days yet for the new waste segregation laws and every single person’s input is important—every drop of water makes an ocean. 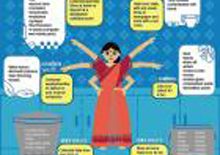 Residents of Bangalore will now be required to separate waste before it is collected by municipal authorities.With overflowing landfill areas becoming an increasingly pressing issue nationally, the Karnataka state government has implemented new processes to its waste management system in Bangalore. Residents and companies operating in the city are now required to separate waste prior to its collection by municipal workers.