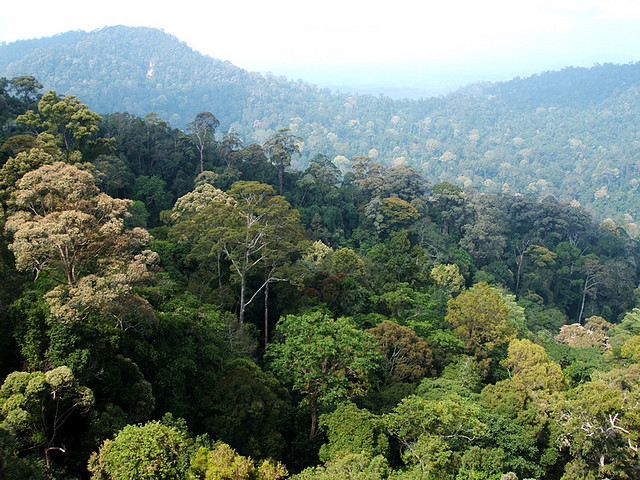 The term primary rainforest refers to untouched, pristine forest that exists in its original condition i.e.its  development has not been perceptibly influenced by man. Everything else is secondary rainforest, which has been disturbed in some way, naturally or unnaturally.

When rainfall is high and evenly distributed throughout the year (at least 2000 mm/yr or 100 mm/month), evergreen rainforests develop, forming the core of the tropical swath along the equator. Home to the world’s most lush and diverse flora and fauna, this region has almost daily rainfall. Even though tropical rainforests cover only some 11.5 percent of the world’s surface, they store in their biomass over half of the world’s rainfall. 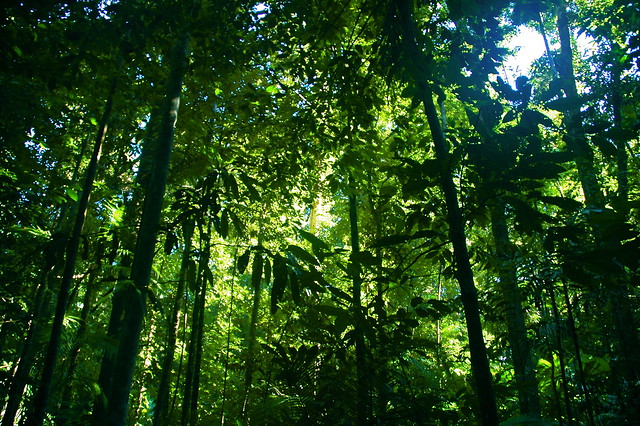 Three quarters of the soil in the tropics is very low in nutrients. It is very old and therefore much of its mineral content is already washed out. The fact that rainforests can exist despite infertile soil is due to a perfectly balanced, inbuilt recycling system. First, fallen leaves, dead animal and plant matter decompose on the topsoil. Countless small animals, fungi and bacteria seize upon the organic material and decompose and mineralise it in a short period of time so that plant roots can absorb the nutrients. In order to maximise absorption, many trees have a shallow and effective network of roots, some of which even grow upward. Fungi play a very important role in this recycling system. Using the fine tree roots, they enter into a symbiosis called Mycorrhiza. Together, they form an extremely effective circulation system of nutrients that maintains the minerals in circulation too. The fungi make it easier for the tree roots to absorb the minerals and in return they receive carbohydrates from the tree, produced in the leaves through photosynthesis.

Large-scale felling of trees leaves has a destructive effect on this process: the Mycorrhiza is destroyed, the nutrients flow away and become forever lost to the system. How low the nutrient content of the soil is can be measured by the supply of nitrogen in the soil. In Central Europe, 94 percent of the nitrogen supplies exist in the soil and only six percent are contained in the biomass. It’s quite the contrary in the tropics: here more than half–58 percent to be precise– of nitrogen supplies are stored in the plants, while 42 percent are found in the soil.

High insulation year-round, favourable climate conditions, uninterrupted cycles and maximum biodiversity mean our current tropical forests have some of the highest volumes of biomass on earth. Tropical rainforests contribute 29 percent of the earth’s total foliage biomass. Three out of four of the currently known 1.85 million species come from the tropics. In one square kilometre of forest in Panama, 41,000 insect species were counted!

The rainforest receives between one quarter and, at most, one half of the water it requires from rainfall with the lion’s share of its water needs being met via its own micro-water cycle. In the rainforest, large amounts of water evaporate and form mighty rain clouds. These rain down over the forest and then evaporate, ready to repeat the cycle.

Sufficiently large and interrelated forest areas are needed in order for the micro-water cycle to be self-sustaining, meaning, naturally, that deforestation plays a significant role in this process. Model calculations assume that the micro-water system functions as long as at least 50 percent of the original forest area available was in existence before the start of deforestation.

Experts thus fear that a chain reaction could be triggered: if the micro-water cycle is even delicately disturbed, it could completely collapse. The forests wouldn’t have the necessary water, which could accelerate the deterioration of tropical forests. 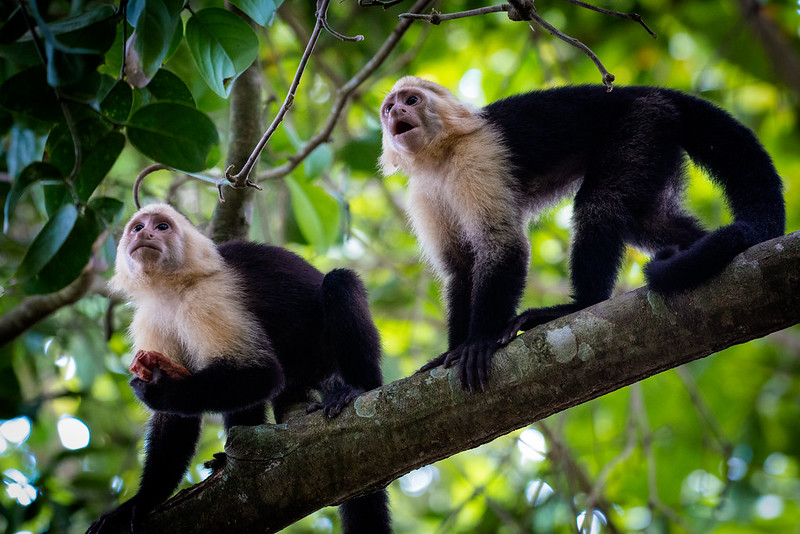 Away from The Equator

Gradually, the seasonal dry forests become superseded by savannas and forests of cactus. In coastal regions, one finds a special type of tropical forest: the tidal forest or the so-called mangrove forest. Mangroves ultimately carve out their own ever-growing habitat. The roots of these mangroves grow in sedimentary depositional environments. In the process, the mangrove’s dense network of roots acts as mechanism to catch the silt. Once the process is initiated, more and more silt accumulates. The process is impeded, above all, when sediment is washed away by tidal currents.

At the beginning of the 21st century, 39 million square kilometres of the Earth’s surface was covered with forest, some 19 million of which was tropical forest. In the middle of the last century that figure was almost double! The loss of forest area continues: today, on average, over 415 square kilometres of tropical rainforest is deforested daily. That is equivalent to an area larger than the city of Munich.

Between 1990 and 2000 alone, around 900,000 square kilometres of tropical forest was irretrievably lost. Commercial logging for lumber production, which is almost exclusively used for export, but also for firewood, is one of the most important factors causing deforestation. The exploitation of the land for agriculture is another. On the one hand, plantations arise for the cultivation of highly exportable products (cash-crops) like soy, coffee, sugarcane, cacao, palm oil or oranges. On the other hand, grasslands are created for the farming of livestock.

The traditional system of shifting cultivation itself exacerbates the problem. In its prevailing form, shifting cultivation hardly corresponds to the small-allotment, slash and burn practice of the original inhabitants. Much more common today is  deforestation, by numerous landless settlers, of unregulated parcels of land in order to cultivate food for their own personal needs. Due to the quickly exhausted soils, which don’t permit lasting usage or steady yields, the settlers move along after a short time to deforest other still-fertile areas.

Various infrastructure projects also contribute to the deterioration of tropical forests. The building of settlements, transportation routes or industrial facilities is analogous to the construction of reservoirs for hydroelectric power stations. Here, rapid deforestation occurs in order to enable the reduction of mineral resources like copper, nickel, manganese, gold or iron ore.

As a measure to preserve valuable ecosystems and tropical rainforests, the designation of protected area has proven effective. At the turn of the century, around 12, 750 protected areas constituted over 12 million protected square kilometres, 30 percent of which are national parks. 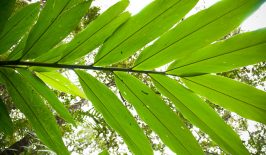 Forests in South East Asia are continuing to disappear due to unsustainable logging practices, shifting cultivation and infrastructure development. This means that the region is ripe for piloting mitigation activities through limiting deforestation and carbon storage from the forestry sector.