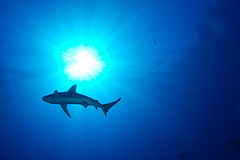 The programme places a focus on aerial surveillance, namely via drones and helicopters, to monitor waters and assist shark tagging operations. 20 4G listening stations will be installed along the coast that will be used to track tagged sharks, with the data on shark locations to be made available to the public via the SharkSmart app in real time. These measures will be complemented by six barrier net trials and five ‘clever buoy’ in-water sonar technology trials.

There have been 13 shark attacks off the north coast of New South Wales (NSW) since the start of the year. This initiative is designed to keep swimmers informed of shark locations and thereby minimise the risk of an attack. It is also designed as a means of protecting sharks against culling. In 2014, after a spate of fatal shark attacks, the government of the Australian state of Western Australia introduced a controversial ‘shark culling’ policy that allowed fishermen to kill sharks over a certain size if they were found too close to the shore. The decision was met with intense backlash from the public and the policy was eventually dropped but not before 170 sharks were caught in drum lines.

A recent summit held in Sydney gathered around 70 shark experts who discussed the use of other technologies – such as underwater gates that release electro-magnetic fields and flexible plastic nets – that deter sharks. Measures that inform swimmers about shark activity in the water and help repel sharks (instead of killing them) are seen not only as a more humane way of preventing shark attacks, they may also help in managing climate change. A study published in September 2015 analysed the impact that the loss of top ocean predators (through overfishing, culls and the like) has on carbon storing, finding that a lack of predators means certain species – like turtles and crabs – are increasing in numbers and consuming more coastal and seabed vegetation, consequently releasing any carbon dioxide stored in those areas into the atmosphere. As noted by The Guardian “the paper points out if just one percent of this vegetation is lost, 460m tonnes of carbon dioxide would be released – the equivalent emissions of 97m cars.”

Programmes that combine public education with the latest technology to track and convey information about shark movements could hopefully go someway towards protecting beachgoers and curbing calls for shark culls. Learn more about the programme in NSW here. 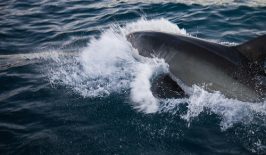 Scientists in Western Australia are using Twitter to alert swimmers when sharks swim within one kilometre of a beach as a means of reducing attacks.

Of Algae and Algorithms: Shark Tracking in the 21st Century