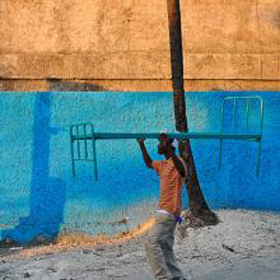 The eye of the storm remained west of the Haitian coast however the island was lashed with heavy rainfall in the days before the storm hit the east coast of the USA. Strong flooding destroyed a large number of the island’s crops including corn, coffee, bananas and sugarcane while heavy downpour has resulted in mudslides. The New York Times reports that Sandy has caused up to 52 deaths on the island.

According to TIME, much of the south is still flooded. Houses are standing in muddy water and the fields are submerged, wreaking havoc on local agriculture with many just-sown plants and crops now ruined.

Crop losses of this magnitude could lead to a food shortage as well as higher food prices according to the United Nations. World Vision estimates that this hunger crisis could impact around 1.5 million people.

This state of emergency comes at a time when Haiti is still dealing with the aftermath of the 2010 earthquake. The government of the impoverished island nation has struggled to meet the challenges of managing international aid meaning much of the pledged aid from foreign countries following the earthquake has still not been distributed to the intended recipients. As many as 370,000 people are still homeless and living in tents while unemployment remains critically high. Haiti must now deal with an expected spike in cholera infections as a result of the flood waters caused by the hurricane.

Your donation will directly support Habitat for Humanity with their work in Haiti!

For further information on the situation in Haiti: