Calling All Bloggers, Activists and Journalists – Nominations for the Bobs Awards Now Open 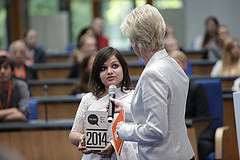 German media outlet Deustche Welle is calling for entries for its annual Bobs competition, recognising bloggers, activists and journalists who have effectively used digital tools to campaign for social or political change.

German media outlet Deustche Welle is calling for entries for its annual Bobs competition, recognising bloggers, activists and journalists who have effectively used digital tools to campaign for social or political change.

Know of a recent online campaign that really made its mark? Encourage the team behind it to submit an entry to the Bobs. Nominations are accepted in 14 languages (Arabic, Bengali, Chinese, German, English, French, Hindi, Indonesian, Persian, Portuguese, Russian, Spanish, Turkish or Ukrainian) and are currently open until Thursday, 12 March. All entries will compete for the Deutsche Welle-chosen ‘Freedom of Speech’ Award as well as the three Jury-selected Awards: Social Change; Privacy and Security and Arts and Media while the public will vote for their favourite campaign within each language category as part of the Bobs’ people’s choice awards.

This year’s jury is made up of bloggers, activists and journalists such as Oksana Romaniuk, a journalist from Reporters Without Borders; Renata Avila, a Guatemalan human rights lawyer; and Alexander Molozow, a Russian journalist and political scientist, among others.

Past winners of the Bobs include Ushahidi, an open source software platform to fight corruption and manage outbreaks of violence, and Egyptian blogger Alaa Abd El-Fattah.

For more information on submitting a nomination, please head to Deutsche Welle’s website. 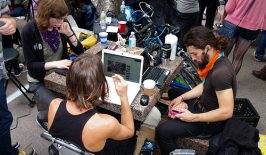 The perceived apathy of participants in today's technology-driven social campaigns has given birth to derisive terms such as slacktivism and clicktivism. The ubiquity of these terms is glossing over the rather pivotal role that technology can play in proliferating social causes. We chat with Halabol about technology and activism.