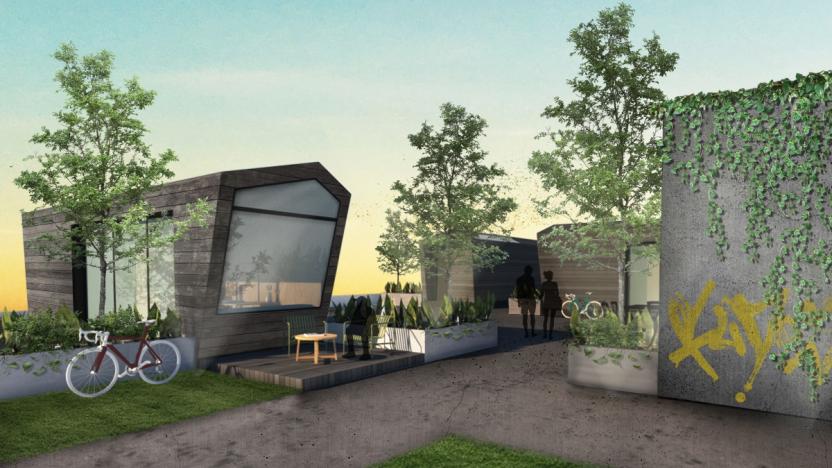 Simon Becker and Andreas Rauch – two young architects from Germany and Austria – are rethinking urban living space with their innovative and sustainable minimalist wooden houses, designed for installation on the unused roofs of inner-city buildings.

Their start-up, Cabin Spacey, was founded back in April 2016. Right now they’re busy working on their prototype and the first test house is set to be installed on a roof in the German capital. But that’s not all the Cabin Spacey team has in store. In interview with RESET they tell us about their vision, their target market and how, when it comes to their concept, sustainability is key.

Your vision is of a “city above the city”, where you tap into urban space that has never been used before. Where are you at right now?

Exactly. Cities are ready for innovation and deserve concepts that meet the needs of a new generation. That’s why Cabin Spacey is a new way of thinking about living space. There’s insufficient housing in cities at the moment, and it won’t fulfil the demands and needs of coming generations, so we’re creating new, innovative and flexible living spaces. It obviously doesn’t just come down to the amount of square metres anymore, but it’s also about the experience, the atmosphere, the view, the location and above all, the quality.

Our cabins are ecological and sustainable minimalist houses, fitted with state-of-the-art technology, designed with the lives of the future in mind. Here’s where Cabin Spacey generates spaces that have never been used before, but offer the perfect conditions for new concepts. Like a city’s overlooked empty roofs, for example. And by using new concepts, a city can expand on what’s already there.

In Germany you can’t just decide to build a house – even a minimalist one – from one day to the next. What challenges did you have to overcome?

Just like with any house, we had to apply for a construction permit. So we also had to conform to prescribed standards – like building in accordance with ENEF, for example. And when adding an extra storey, or building on a roof, there are certain regulations that you have to comply with. For that, we sought advice from experts from all kinds of different areas.

First the structure of the buildings has to be analysed and evaluated. Then a technical layer is built onto the roof, after which the cabins can simply be placed on top. Most of the challenges are very technical, but they’re doable. Cabin Spacey works together with very strong partners who support us in those areas.

You’re not setting out to solve the issue of a lack of urban living space. What are your goals?

Cabin Spacey’s goal is – as economists would say – to offer supply for an existing demand. According to a study, 90 per cent of millenials wish they could have more flexibility in both their jobs and their private lives. We will build easily accessible and flexible living spaces, in extraordinary places, for exactly those people. And to do that we’re using something that has never been used up before now – empty rooftops.

The cabins are ecologically sustainable too, and offer a really pleasant living environment. We’re convinced that there’s not enough of that kind of housing on offer, and it’s something that’s incredibly important. Living space can be more innovative, especially in terms of state-of-the-art technologies. Cabin Spacey makes use of systems that allows us to offer digital nomads not just a space to live in, but also a workspace with a large range of technologies that they need. And the concept can be expanded on too, meaning that new objectives can always be added as we go along.

You want to move away from the concept of ownership and take more of a Sharing Economy approach. What does that look like in practice and who might live in your cabins?

It’s clear that personal values have changed. We’re moving away from settled lifestyles, making compromises and seeking ownership, and towards a life with more freedom, independence, flexibility and above all, easy access to exactly what it is we need. Starting with cars, bicycles and other objects all the way to the housing market.

We want to integrate other minimalist house providers into our booking platform and therefore not just offer our own cabins but also existing, unique small houses in other cities. We know that people value access and flexibility more than actual ownership. Especially when you’re always on the move and moving from city to city, or working from home, we offer the options to satisfy that kind of lifestyle. Above all, it’s people who are always looking for new experiences, looking for a community that shares the same values. We appreciate urban nomads’ willingness to travel and we want to make their move to new cities as simple and possible. Co-living as the logical conclusion to co-working, as it were.

Smart home is a buzzword. How “smart” are your minimalist homes? And what kinds of digital innovations do you want to use in future developments?

Cabin Spacey has a particular focus on simplicity of access. The booking platform will offer flexible booking options and you should be able to open the cabins using a code on your phone. The online platform is crucial here, because currently there’s not enough minimalist living options on offer. It will also make it easy to communicate with the people living inside the cabins.

It will be easy to connect to all other existing sharing providers too. Whether you need a bicycle or a car, a fitness pass or a spa – everything will be bookable via the cabin. And many popular services, similar to Netflix or Spotify, will be integrated so that they can be easily used day to day. You’ll be able to control features of the cabin via a console or the smartphone too, like the lighting for example. This allows the energy consumption of the cabin to be optimised.

As soon as the prototype is ready to be inhabited, we’ll take another look at how it can be used in practice, what might need to be added, which services aren’t necessary and which might be missing.

What role does sustainability play?

As we mentioned before, to us sustainability is key. Conventional housing contains a lot of toxic and non-durable materials. In some instances the insulation and ventilation is so poor that mould soon begins to form. Cabin Spacey will change all that! Our cabins are made of ecological materials and that’s carried consistently throughout the whole project. The outer shell will be constructed from solid wood, meaning the cabins are guaranteed to last for 80 to 100 years. And there are energy-saving systems installed in the bathroom and the lighting. And the photovoltaic unit on the roof of each cabin produces solar energy which can also be fed into the city’s energy supply.

What’s next? Are you planning ways to make your concept internationally viable?

At the moment we’re in the middle of constructing our prototype, which will be installed on a roof in Berlin. As soon as that’s done, first of all we’ll have a massive party, and then we’ll open the cabin up to the public. At the same time, we’ll present the platform and the first cabins and other minimal houses will be made available for people to book and move in.

Cabin Spacey is starting out in Berlin and Germany, but we’re thinking global. Soon it should be possible to live in a cabin when attending a conference in Lisbon or for a project in San Francisco. Rooftops should be built upon and Cabin Spacey has got a few exciting concepts up its sleeve, like for example roof cafes, roof gardens and spas with views of the city. We’re excited to see how it all plays out in practice and what else we come up with. We hope you are too! 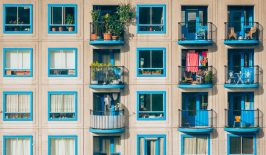 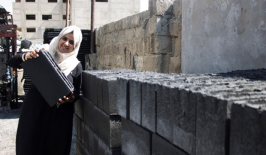 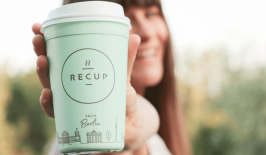 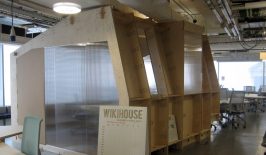 Want to know how to make your own house using materials from your local hardware store, a CNC milling machine and a little bit of elbow grease? Then WikiHouse might be just the thing for you. 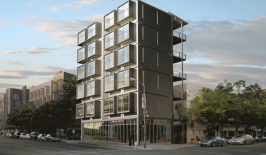 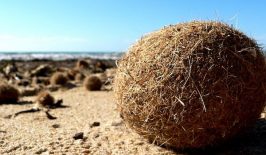