As of 2015, 1.2 million people in Dakar, Senegal were living without adequate sanitation - no flushing toilets, not connected to a sewer line and forced to use pit latrines out in the street. Pit latrines are often not much more than a hole in the ground, meaning there's a high possibility of pathogens leaching out of the area and contaminating the environment and nearby groundwater. And contaminated environments can kill. Inadequate sanitation is thought to cause nearly half a million diarrhoeal deaths annually, as well as contributing to malnutrition and increased rates of other diseases. Senegal of course isn’t the only country in this situation. 650 million people in Africa are deprived of sanitation infrastructure. And worldwide, 2 billion people use latrines that aren’t adequately drained.

Ten years ago, the Bill and Melinda Gates Foundation commissioned the design of a revolutionary sanitation system for underserved cities in the Global South - that would turn waste collection and processing into a business opportunity. Sedron Technologies (previously called Janicki Bioenergy) created a so-called "omni processor" that converted the waste collected from pit latrines into three pathogen-free by-products: drinking water, electricity, and ash.

A pilot project was set up in 2015 called the "Janicki Omni Processor (JOP)" in Dakar, thanks to a public private partnership between the Bill & Melinda Gates Foundation, the National Office of Sanitation of Senegal (ONAS) and Delvic Sanitation Initiatives, a local sanitation company. Since then, the system has been treating increasing amounts of the city’s sewage. In 2018, after three years of testing and training, ONAS transferred full operations to the local company.

The Janicki Omni Processor works a little bit like a steam power plant, an incinerator, and a water filtration system combined - with all three of them working in harmony with one another.

The electricity generated is enough to power the cycle of processes, meaning the Omni Processor is self-sustaining. And as if that wasn't enough, the plant also generates additional electricity which can be distributed elsewhere, and the solids left by the boiler—a kind of non-toxic ash—contain phosphorus and potassium, which can be used as a fertiliser for soil. 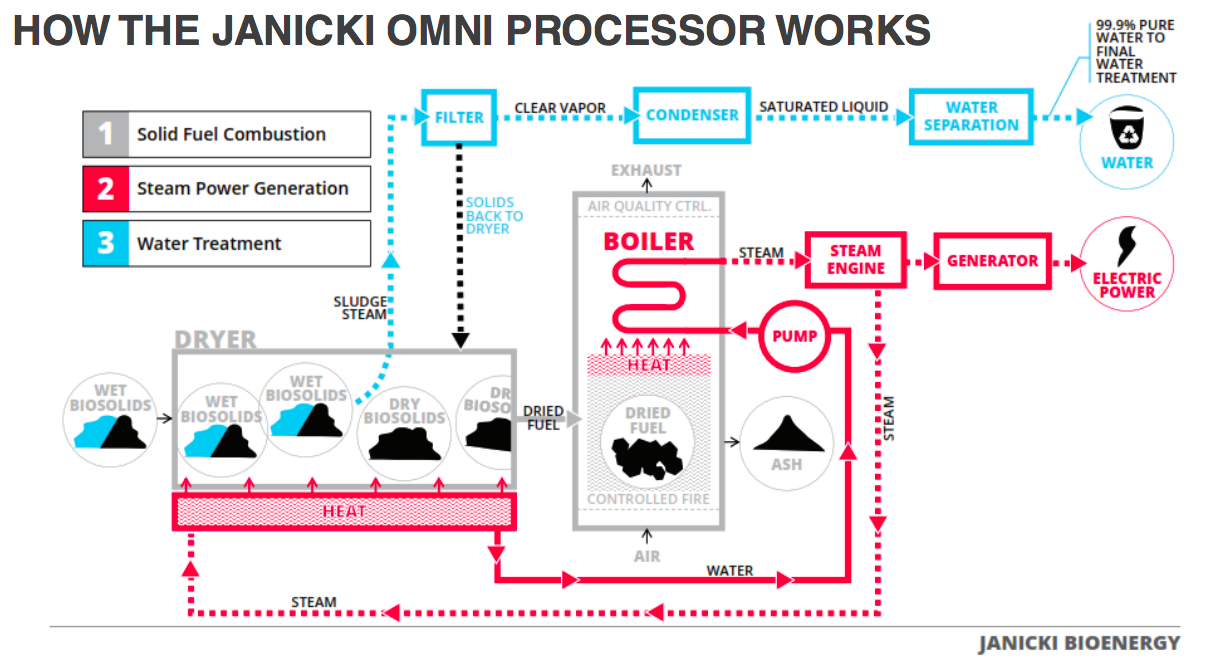 Much of the technology used in the JOP machinery isn’t actually uniquely innovative - it had been around for some time. But it hadn’t been used to form part of a sustainable sanitation initiative before. Why? Because “the people who understood the technology weren’t getting sick or dying from contaminated water, and they didn’t know anyone who was,” wrote Bill Gates. Engineers in industrialised countries had no incentive to transfer the technologies to sanitation facilities in developing cities, where it is not financially feasible to install the sanitation infrastructure used in industrialised cities, let alone think how it could be used to turn a profit.

The pilot in Dakar has taught the project team several lessons that hope to correct in the larger, commercial version of the JOP that they are currently planning - including adjusting and improving it to include increased corrosion resistance, higher processing capacity and output quantities, improved automation, and added flexibility for various operating modes.

If it can prove to be economically feasible, it holds the potential to transform sanitation and save lives, all across huge areas of the world. Mme Léna Tall Faye, the chairperson of the board of directors of Delvic Santitation Initiatives, is convinced of the value hidden in waste management and wants to encourage more African entrepreneurs to invest in sanitation, as a sustainable, social business opportunity with potentially life-saving impact. “Sewage is not waste," she says, "we can use it to create high-quality goods with real value.”

News BRCK: Connecting Africa With Some of the Smartest Rocks Around