I recently watched a show called Cabin In The Wild, where people were challenged to build a unique cabin as part of a pop-up hotel. Eight cabins were chosen to compete, with the finalists split between DIY carpenters and engineers, to architects, and well, dreamers. One common thread: the closer the team were to building the cabin themselves, the more likely it was to succeed. Experience seemed to play a factor as well - younger teams were often more ambitious, and the final build had more compromises than envisaged from the blueprint.

The overall winner was just this one savant, who designed and built a stunning cabin all by himself. What was probably the worst one in the end was an intriguing elevated cabin that couldn’t be elevated because its supports were more like a wobble-board than load bearing.

The ambitions of youth and blueprints not quite coming together in reality brings me to The Ocean Cleanup project, an ambitious attempt to harvest plastic from the ocean, funded by many well-meaning hopefuls. The concept started as an idea by young Dutch inventor Boyan Slat. Slat’s famous TED talk when he was 18-years-old started a movement, raising more than 40 million USD to fund the idea, including 2 million USD in 100 days.

His idea was to develop a set of passive cleanup rigs - sort of like giant screens suspended in the sea - that would use natural oceanic forces to catch and concentrate the plastic waste being carried by ocean currents. Models developed by the Ocean Cleanup project indicated that a full-scale system roll-out could clean up 50 per cent of the Great Pacific Garbage Patch within 5 years, paving the way towards a completely plastic free ocean.

True to his word, Slat’s Ocean Cleanup project found its way to reality. From 2016, it launched a bunch of prototypes and test devices, and in May 2018, a 120m section passed a tow test.

Finally, a 600m boom was shipped out from San Francisco bay, complete with a 3m deep skirt, design to act as a sieve for the ocean’s floating plastic. It passed some tests, and was towed deep into the Great Pacific Garbage Patch to being harvesting the ubiquitous plastic found in the ocean: bags, bottles, scraps of flotsam and jetsam. The first model was officially called System 001, but was dubbed “Wilson" after Tom Hanks’ volleyball in the movie “Castaway”.

Wilson Takes to the Seas... and Fails to Catch Much Plastic

Since it’s been floated and put to work, there have been two major issues. The first is that, initially, the system just didn’t catch the plastic. The team reported on November 20th that plastic had floated in... and floated straight back out. That issue was thought to be because the plastic, pushed by waves, wind, and ocean currents, moved faster than the U-shaped structure.

(If you want to try this yourself, fill your sink and add a few breadcrumbs. If you move a sieve through the water, the crumbs catch and stay in place, with the movement pushing the crumbs into the sieve wall. If you move the sieve more slowly, or stop and start, breadcrumbs will float in and out randomly.)

The team had set a workforce to the task of modifying the system to improve the speed, by opening the mouth of the U-shape wider to increase surface area and therefore become a larger ‘sail’ in the water. 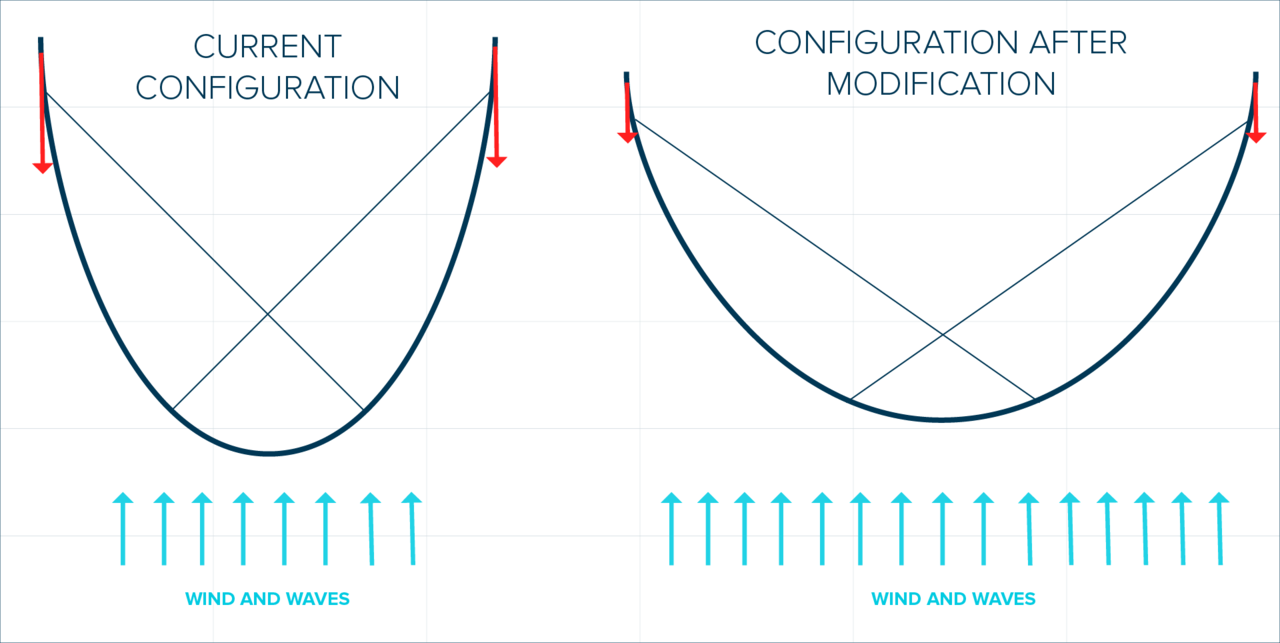 The second major issue is that the boom broke. A section of the boom measuring 18m had broken off, moving away from the main part of the structure. Fitted with GPS tags, the piece was still in close proximity, but appeared to have been disconnected through “material fatigue, combined with a local stress concentration,” according to a blog post by Slat on the Ocean Cleanup site - adding that “we are, of course, quite bummed about this.”

But Slat reiterated that the team believed the problem to be a teething issue, and not outside the realm of what was expected. According to comments reported by USA Today, Slat said it’s all been par for the course: “Secretly, we were hoping on Day One it would be deployed and in one go, magically, it would work as planned. But realistically we’d been planning that we’d need to take it in and out multiple times,” said the 24-year-old CEO.

At this point it's unclear how far along the modification work to the structure has been completed. System 001, in two parts, is currently being towed to port in Hawaii for upgrade and repair. No material has been lost, and the team hauled in two tonnes of floating plastic, including two immense ghost fishing nets, which are now set to be recycled.

“We warned you so,” say the critics

The Ocean Cleanup project has had its critics. Not for the endearing Boyan Slat or the ambitions to clean the ocean, but more the way in which the project has gone about trying to bring change. The main arguments are:

“The ocean is a big, mean place,” said oceanographer Kim Martini, who has been analysing and reviewing the project. “It sounds like it suffered material fatigue from repeated movement which is something that, you know, happens on the ocean. It's not really that surprising.”

While that doesn’t mean the best laid plans shouldn’t be tried, we do need to get back to the heart of the problem: treating the symptoms, rather than the cause. The cause of plastic waste is garbage making its way into waterways. Even if there was a super safe and easy way to fish plastic out of the ocean, the truly meaningful thing we can do is stop more of it getting there in the first place. The problems faced by the Ocean Cleanup project are clear evidence of that.

We need to make conscious individual decisions to avoid using disposable plastics wherever possible, but also, and possibly more importantly, change and limit our use of plastics through legislation. One of the biggest steps taken was back in December 2017, when just short of 200 countries signed a UN resolution to eliminate plastic pollution in the sea. Sadly, no timetable was set on the agreement to monitor amounts of plastic ending up in the ocean, or how to crack down on illegal waste dumping in oceans. Legal binding international laws will be a first step.

As I said at the start of this article, the difference between cleaning up the ocean in theory and cleaning it up in practice is, unfortunately, but maybe not unsurprisingly, much larger than expected. The Ocean Cleanup offers us hope because it makes us feel like there was a relatively straight-forward sounding man-made solution to a huge and complex man-made problem. And that just doesn't seem to be the case. Let's hope that The Ocean Cleanup project gets back on track, but without us ever forgetting that first and foremost, we need to tackle the problem at the source, and drastically change our relationship with plastic.

News Solubag - the Soluble Solution For Plastic Bags in the Sea?

Knowledge Microplastics: Tiny, Toxic and All Around Us

News The Plan to Turn Paris Green, Literally, by 2020

News TrioCup: Where Origami Meets Coffee Lids to Cut Down on Plastic