Millions of people all over the world are affected by environmental disasters, disease, and conflict. And humanitarian aid workers serving these communities are often called upon to provide their services to huge numbers of people, spread across large areas of land. It is essential to know where the most vulnerable communities are located, those in most urgent need of assistance, yet millions around the world are not represented on any accessible map - making response efforts difficult and inefficient. MapSwipe is a mobile app that offers a crowdsourced solution, enabling volunteers around the world to help put those communities on the map.

Once they've downloaded the app, MapSwipe puts users on a mission: refugee aid in Colombia or healthcare needs in Venezuela, for example, and then throws up satellite images of the relevant areas. Then all they have to do is click and swipe to pinpoint where critical infrastructure and populations are located. An in-app tutorial explains how to indicate signs of habitation in the satellite imagery: tap on the image tiles that show a building or road, tap twice if it’s a maybe — you can’t quite tell if it’s a construction or a natural formation — and tap three times if the imagery is either missing or covered by clouds. The marked tiles will then be used by other volunteers to draw up detailed maps.

MapSwipe volunteers provide critical information to the Missing Maps programme, a collaborative project in which a large group of NGOs, academic institutes, companies, and individual mappers, fill in the gaps in OpenStreetMap, a community-driven project to create a free and editable map of the world.

The work of MapSwipe users allows the Missing Maps team to speed up their work by letting them focus only on areas where they know features need to be mapped and where communities are located. The crowdsourced spatial information provided by MapSwipe helps service providers attend to urgent crises and plan long-term infrastructure and programming to improve food security, health and wellbeing. 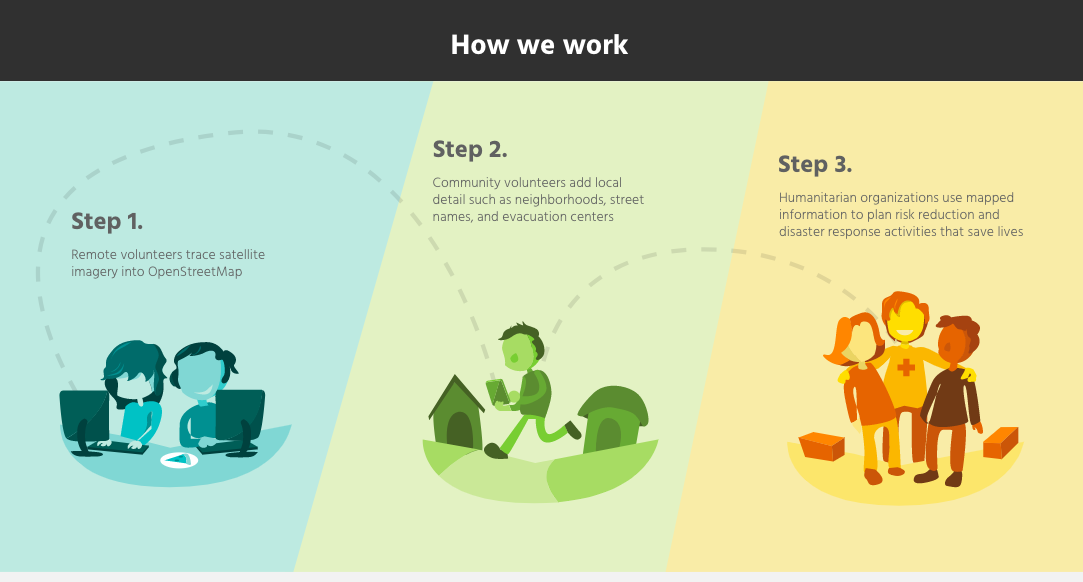 This application is easy and user-friendly, and you can contribute from literally anywhere you have an internet connection - during your morning commute or your coffee break. There's even a leaderboard that tracks the project's most prolific swipers.

Since its release in 2015, MapSwipe has engaged more than 29,000 volunteers and provided spatial data on more than 600,000 km2 across 29 countries. Medecins Sans Frontieres (Doctors Without Borders) used data from MapSwipe when tackling the recent measles outbreak in the Democratic Republic of Congo. The data offered vaccination  coordinators an up-to-date snapshot of where population clusters were located, meaning they could send out teams to the places where they were most needed, achieving maximum vaccination coverage in optimum time.

If you’ve tried out MapSwipe and you want to take your cartography skills a step further, you can contribute directly to the Humanitarian OpenStreetMapTeam, which also offers video tutorials on map editing. Editors can take on urgent mapmaking missions and provide critical spatial information where crises are identified. Maps currently filed under urgent priority include typhoon, cyclone and landslide disaster areas in Japan, Philippines and Kenya.

Mapswipe is an open collaboration founded by the American Red Cross, the British Red Cross, the Humanitarian Open Street Map Team (HOT) and Medecins Sans Frontieres. MapSwipe Analytics tools are developed by the Heidelberg Institute for Geoinformation Technology who are currently working on developing a future version of MapSwipe that combines the crowdsourced data with methods from machine learning to optimise the mapping process - predicting what shapes might be and speeding up the initial identfication process.

MapSwipe is available to download for free for both iPhone and Android.

News Crowdfarming: A Farmers' Market 2.0 For Food Directly From the Source